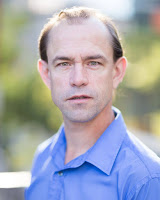 Rich Swingle has been performing one-man plays since 1991, and now his wife Joyce is adding to the repertoire. He's been involved in the performing arts and applying theatre concepts in the business world full-time since 1995. His plays and workshops have opened doors for him in 29 nations on five continents. Since 2010 he's performed in over 20 films.

Scroll down for Rich's one-man plays...

Big Fish Little Worm
The stories of Jonah, Gideon, Jeremiah and Lazarus come to vibrant life under a theme of hearing God's voice and responding. This is Rich's first creation, and he's been doing the Jonah piece since 1992.

Beyond the Chariots
The four time Academy Award winning film Chariots Of Fire tells how Eric Liddell refused to run the 100 meters in the 1924 Paris Olympics because a qualifying heat was held on a Sunday. Beyond the Chariots picks up where the film left off, showing Eric in his greatest race, as a missionary to war-torn China. A Clear Leading
Rich's critically acclaimed one-person, two-act play shows how John Woolman spoke out against slavery over a century before the Civil War.

The Revelation
This dynamic portrayal of the last book of the Bible is a one-person play which can stand alone or be surrounded by music and original art. John the Apostle has returned to deliver The Revelation to you today. He's thrilled at the opportunity!

The Acts
The Acts brings to life the miracles and wonder of the first century Church as God's Spirit empowers His people. The story is told from the perspective of a man who spies on the followers of Christ for Saul. As he reports back their actions and beliefs he begins to realize they're following more than just stories.

Views of the Manger
Rich's Christmas program begins with the story of Abraham, using his covenant with God as a look forward to how Christ would come and be the covenant keeper. It also tells the stories of Gabriel, Joseph, the inn-keeper, and the three wise men. 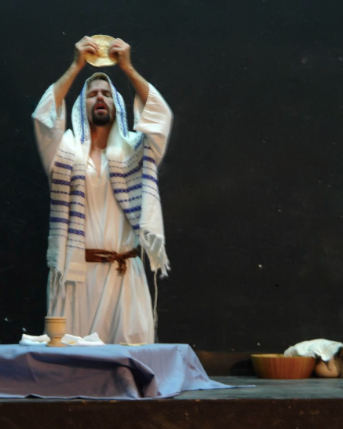 Journey to the Garden
This event invites each audience member to become a disciple and travel with Jesus from his baptism to the Garden Tomb. This Slides from Israel of the actual places these events are believed to have taken place are the backdrop of the greatest story ever told.

Five Bells for 9/11
Five Bells for 9/11 is a memorial to those that died and to those that were wounded physically and emotionally on that infamous morning. The play tells the stories of three people that were directly impacted: Bruce Van Hine, a fire fighter for Squad 41; Lana Ho Shing, a mutual funds specialist for Morgan Stanley, and Father Brian Jordan, a Franciscan priest at the Church of St. Francis. Shepherds Reflect on the 23rd Psalm
Conceived by Pastor Linda Warren, pictured here on the right in the role of Shoshona, Rich and Joyce Swingle address their flock as Zelophahad and Pethahiah, shepherds with a perspective on Psalm 23. Short Pieces
Rich can pull shorter pieces from his feature-length plays and has a number of short pieces that can stand alone. He can also customize or create a piece from scratch, depending on your needs and his available time.

I am pleased to nominate Rich Swingle as The-Best-Performing-Artist-Of-This-Decade for Theater, Film, and an outstanding Acting Coach. I have had the wonderful pleasure of knowing and working with Rich for several years now and have always found him above and beyond talented, professional, full of high energy, dependable, efficient, unfailingly punctual, and so much fun to work with and be around. In fact, I have never worked with an entertainment industry professional like Rich who gives as much attention to detail as he does in EVERYTHING. Also, his willingness to take on difficult Theater, Film, and Acting Coach projects and see them to successful completion has repeatedly impressed me over and over again.
Rich Swingle's skills do not end with his Theater, Film, and Acting Coach experienced accomplishments. He also projects a warm, cheerful attitude to everyone he comes into contact with. Rich has an amazing way of resolving conflicts and handling other difficult situations with remarkable patience and admirable tact. In the community he goes out of his way to help people in need. He loves people, works hard, and always tries to lift the spirits of those around him. I believe these characteristics represent all that is good in Rich Swingle, and I am blessed, pleased, and honored to work with him professionally and to know him personally.
--Owen Hisle
Award Winning Actor, Producer, Director
www.owenhisle.com