Interview After Performance at the Carnegie Hall of Kansas

I recently performed I Dreamed I Was Free at the Brown Grand Opera House, which I'm calling the Carnegie Hall of Kansas. The Brown Grand recently celebrated its 115th birthday. 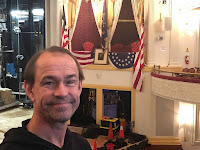 Former Civil War officer Colonel Napoleon Bonaparte Brown had the opera house built with inspirations from the architecture of the Ford Theatre, so just before covering Let Us Worship in Washington, D.C., we toured the Ford, where President Lincoln was shot. One of the differences is that the Brown Grand has a second balcony, whereas the Ford has one.
After performing I Dreamed I Was Free I struck up a conversation with a young man who mentioned that he's starting up a podcast, Scripture Vectors. I asked if he'd want to interview me, and so we did it right on the spot! It just posted today: Rich Swingle Interview About John Woolman and Sharing our Faith.
The day after I Dreamed I Was Free I spoke to Teens in Christ and led them in Enacted Prayer. From there we walked to a local park and I performed Big Fish Little Worm. How wonderful to have the words of Scripture amplified through Concordia, KS! The local paper even picked it up... 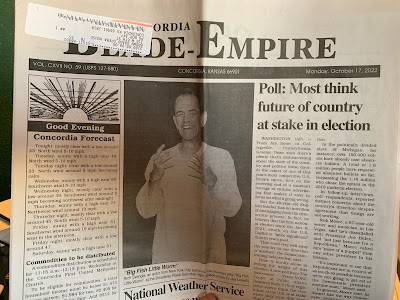