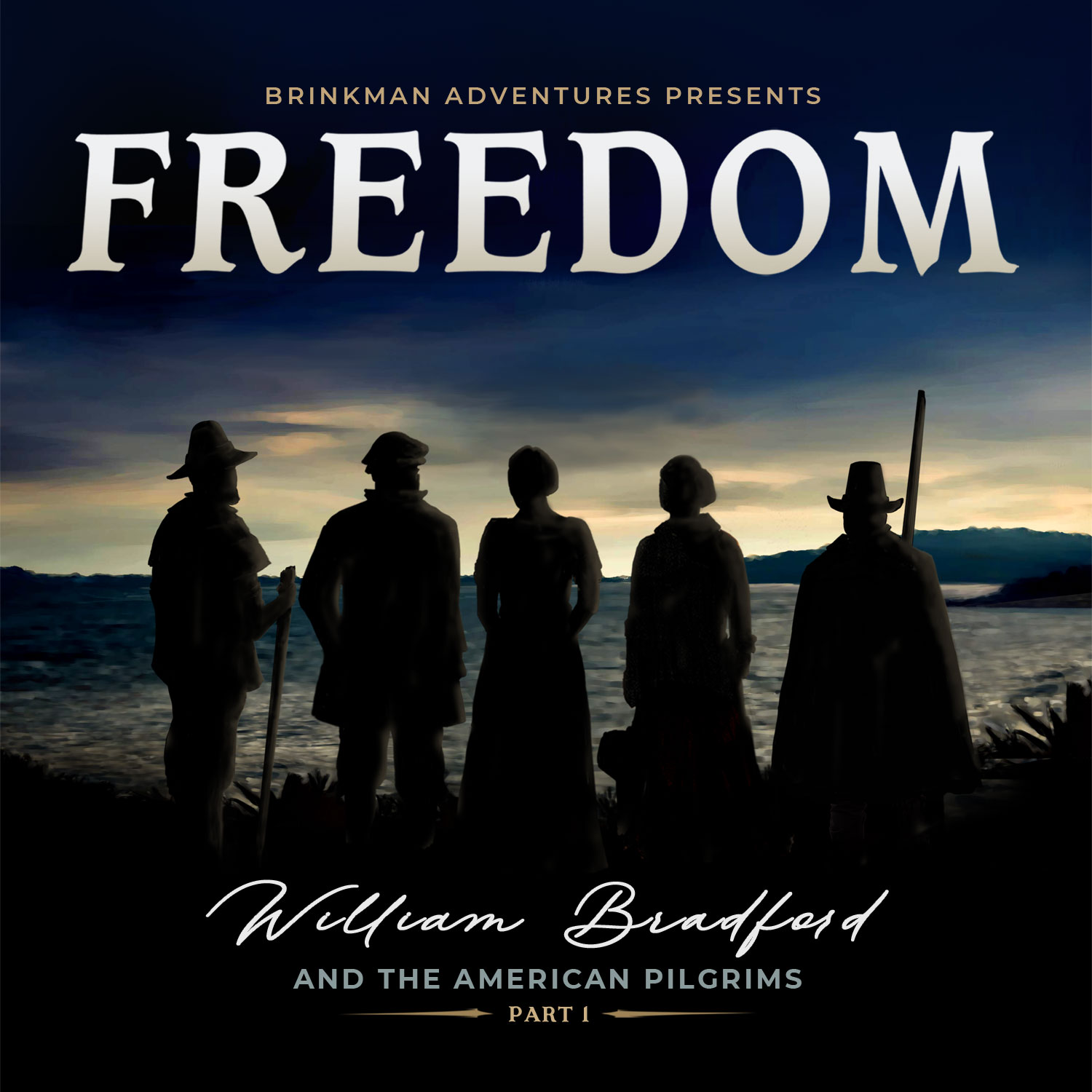 A blessed Thanksgiving, everyone!
Brinkman Adventures has made both volumes of their audio drama, Freedom: William Bradford and the American Pilgrims available.
We love that they show how clearly the Pilgrims were motivated by the desire to worship the Lord according to Scripture and not the dictates of men, how they dedicated America to the spreading of the Gospel, and how they address the concerns of those trying to tear down our history, showing how flawed people did the best they could under extraordinary circumstances.
I asked the director, Ian Bultman, to explain how he got the idea for the project, and he wrote:

We started this after meeting some Christians who run the Jenny Interpretive Center while visiting Plymouth. They planted the idea to do an episode as 2020 was the 400th anniversary. Because Jenny was a ministry, I saw them as missionaries to American and felt they fit our format perfectly.  Soon I realized this wasn't about the Jenny, it was about Bradford and the Pilgrims. The story hits on so many things we are dealing with today in America. Freedom of conscience and freedom to practice our faith unhindered by government; race relations; how to deal with a society that treats us unjustly; suffering for/with Christ; loving our enemies; a pandemic. In hindsight I really see God's hand leading us to this project three years ago before everything that's happened in the US.  I see this as a reminder to America of it's roots and heritage. A warning to those who wish to go back to tyranny. And a reminder to the church how to live in troubling times.  Freedom was going to be two or three episodes. As I studied and wrote, it kept growing. At one point I was stressing over the length and sensed the Lord say 'tell the story and don't worry about how many episodes it will take. So at that point I did just that. There was only one 3 minute portion I wasn't able to tell due to space (we'll be including it on CD as an easter egg bonus track).

Lord, as the intercessors across this country listen, encourage their hearts and faith through the faith and actions of these Pilgrim Fathers who now stand among the cloud of witnesses.   May each listening be reminded that they too are pilgrims, strangers in a foreign land, serving as ambassadors for You with the Good News that each may be reconciled to you through the blood of Jesus.  Help us find ways to get this story circulated across the country this year and may it ultimately be pleasing to you and bring glory to Your name. In your Son's name, amen

In Part 1 I play the roles of Charles Deane (introduced at 8:27 in Disc 1, track 1) and Richard Clyfton (introduced at 2:01 in Disc 1, track 2).
In Part 2 I play Samoset and an unnamed Native American.
Click here to download the audio drama or order the CDs.
I wrote about this and two other Pilgrim projects I've worked on for www.HeadlinePrayer.org: "Pilgrims Past, Future… and Present."
><><><

In Mayflower II we play a couple in the not-so-distant future who host an illegal Bible study that uses Scripture that's been deleted from the government-approved version. Rich's character is an engineer working on the Mayflower II, a spacecraft built to take believers to Mars, the only place left for religious freedom... or is it?
Posted by Rich Swingle at 11/19/2021 05:05:00 PM