What's a Girl to Do? 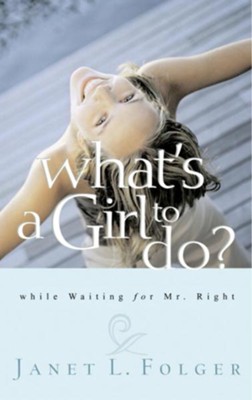 I'm just thrilled to be a part of the upcoming sitcom, What's a Girl to Do? It's written and produced by Janet Folger Porter, president of Faith2Action and the author of the Heartbeat Bill, which is now saving lives in 14 states and counting! Janet understands that politics are downstream of culture, and it's her heart to turn the nation back to the Lord by making us laugh.
The sitcom is based on her book, What's a Girl to Do While Waiting for Mister Right? It tells the story of Janet Folger (played by Janet Folger Porter), who is navigating the single world as a Christian, highlighting the joys, sorrows, disappointments, surprises, and of course the humor. I play Wesley, a nerd, who only had a moment of obtuse selfishness in the first draft of the pilot (you can see that scene in the video below), but the team liked the character so much, he was written into a party scene, and now there's a whole episode called "Wesley the Waiter!" Glory to God! When I tell my students there are no small roles, now I've got a story to prove it!
The show features Robert Davi (The Goonies, Die Hard, The Expendables 3), Rusty Joiner (Dodgeball, Melrose Place, Voiceless), Chris Routhe (Chicago Fire, Empire, Chicago PD), Matthew Moore (Homeless for the Holidays), George Kokkoris (Android Cop, Burn Notice), and many other accomplished actors.
We're still in the fundraising process, so I hope you'll consider partnering with us to bring Light through laughter! Today our team is fasting and praying, so we're expecting the Lord to move in power.
Click here for our fundraising page.
Here's an interview I did with Janet in preparation for an upcoming article I'm going to write about her and this sitcom for www.HeadlinePrayer.org:
Here's the article: "Facing Cultural Giants Through Heartbeats and Humor."
><><><