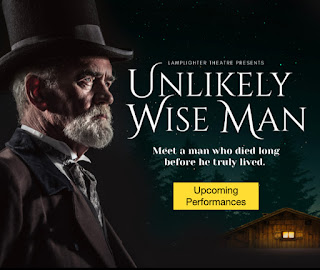 Also, this year our church will be performing it as a readers theatre piece on Christmas Eve at 7 p.m.:
Westchester Chapel Church of the Nazarene
at The Sonesta Hotel
66 Hale Ave
White Plains, NY 10601
(A $9 cab ride from the White Plains Metro North Station)
Here's how I first got involved with this delightful production... 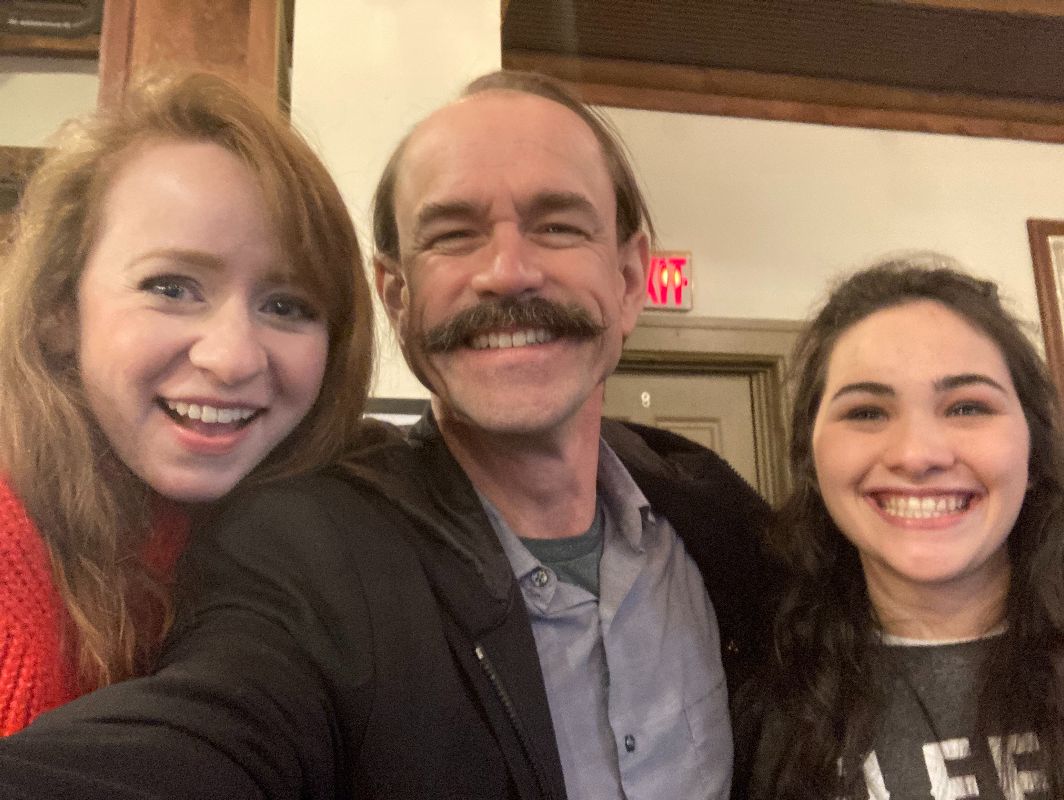 One of the students from the Lamplighter Guild, Angelina SantaLucia (to the right of me, with Rachel Marley), wrote to me several weeks ago letting me know that she got a role in a radio show for a studio audience being produced by Lamplighter Theatre. I was thrilled for her!
I put it on my calendar and looked forward to hearing it. I also said a prayer that someday I'd get to perform in one of Lamplighter's live productions.A few days later I was asked to audition for the same project! Woo hoo!I was cast as a Scrooge-like character in this new radio show, adapted by Molly Mayo and Lamplighter president, Mark Hamby, from Bells Across the Snow by Fannie Eden. 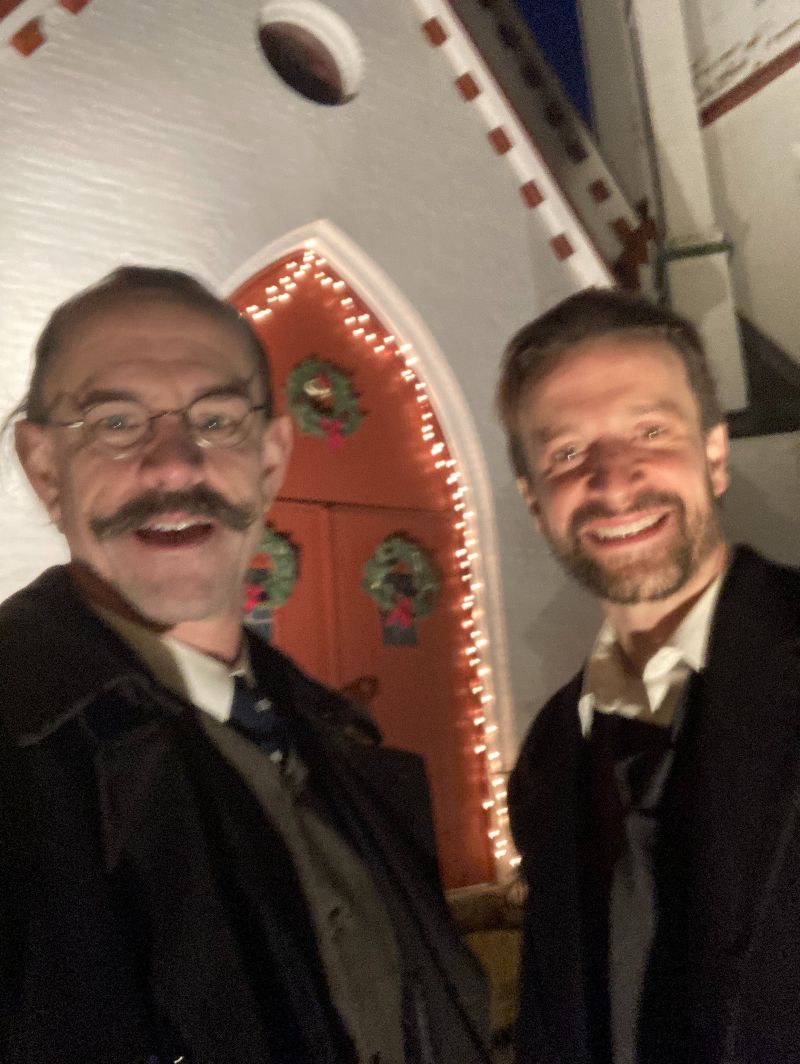 I play Robert Redfern, who is successful in business, but when it comes to family he says, "Love leads to loss and loneliness, and unless you’re strong enough to overcome it, it will ruin you...bankrupt you!" He develops this philosophy when his wife dies, and he blames God. He refuses invitations from his brother (played by David Sanborn, pictured here). He pushes his daughter away because she wants to marry someone who is "unable to give you the life that money can buy!"
But the Lord reaches Robert through a little girl, a lamb, a clever butler and some letters.For the radio show, we performed it the way they did back in the '30s. We were dressed in period costumes and had minimal blocking around four mics. Foley artists created the sounds before the audience's eyes! 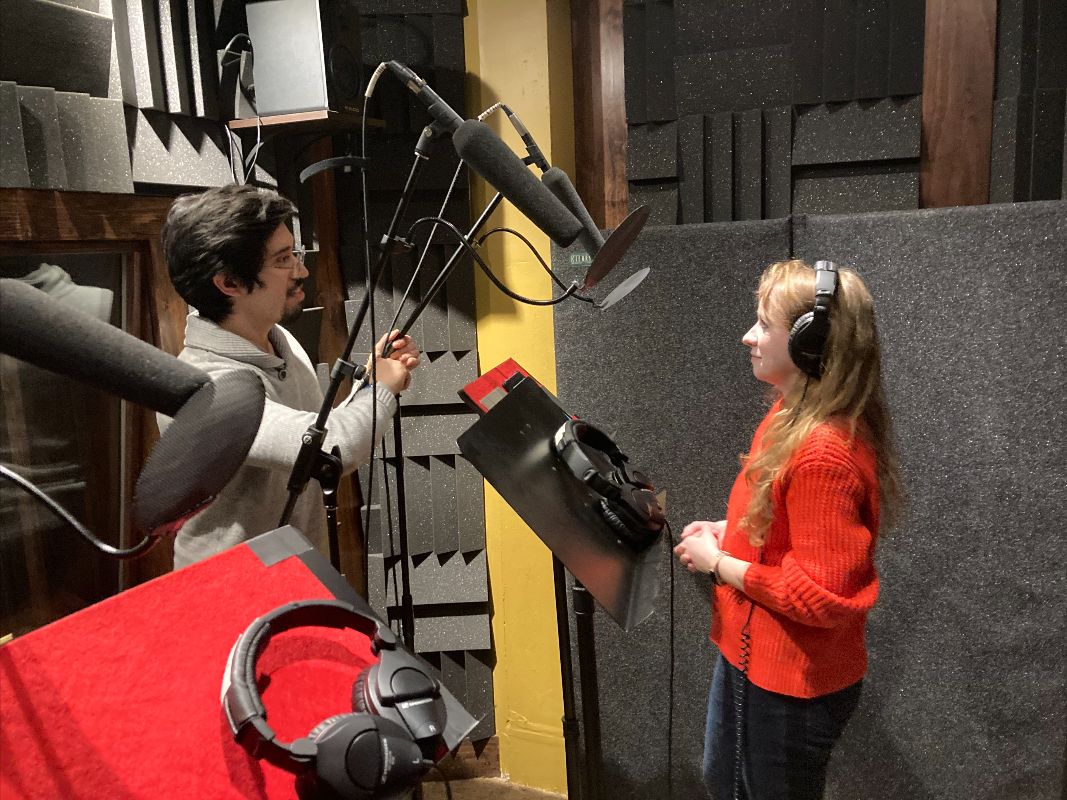 One of the foley artists, Oscar Corral (pictured here, adjusting the mic for his bride of three months in the booth where they met on Escape from the Eagle's Nest), also played a couple of roles, so when he "entered the house," I ran over to the foley corner and created his footsteps! It was SO MUCH FUN!!!
As we got closer to doing the radio show as a live production, the decision was made to record it as an audio drama in the sound booth to go out to radio stations around the world! This meant we skipped a rehearsal for the live version and spent time in the booth to get a studio quality sound. It was a very tight turn-around for sound designer Allen Hurley (Adventures in Audio and other Lamplighter Theatre projects) and composer John Campbell (Adventures in Audio and other Lamplighter Theatre projects). They finished Monday, and more than 400 radio stations have signed up to air it so far!
Posted by Rich Swingle at 12/23/2020 08:38:00 PM