My new favorite film is the Kendrick Brothers' Overcomer.

I heard the producer, Stephen Kendrick, speak at the San Antonio Independent Christian Film Festival in 2013, its final year. He said that Christian filmmaking was just past its infancy. He said we're going stand on our own two feet. We're going to walk, and then we're going to run. We've seen the Kendricks Brothers' films come a long way over the years, and now they're seriously humming! Beth Becka serves as their acting coach these days, and she's putting the actors through their paces. She addressed our students at the Rocky Mountain Christian Filmmakers Camp from the set of Overcomer, though at the time she could only tell us it was K6, the Kendricks' sixth film. But she shared generously about her approach...which is Meisner-based...for the actors reading this.

The opening drone shot was profound! Chad Burns who directed me in Beyond the Mask was their director of previsualization, and I'm guessing he conceived it, and he probably had help from Ethan and Ashley Leddin who did special effects. They did the most SFX of any Christian-themed film at the time for Beyond the Mask and just before this they created the screen that changed everything in Unplanned.

Alex Kendrick directed, and he plays John Harrison, a basketball coach on the verge of the season in which his team is going to win it all! The best players for their strongest competition are graduating, and his students are just coming into their strength. Then a local manufacturing plant moves, and so do many of the families of John's players, as do many of the faculty because they see the school is dwindling. So John is asked to step in and coach cross-country, which he doesn't think is a sport... until he runs three miles. The effect three miles has on the three Harrison men is a "running" joke that keeps getting better. The two Harrison boys are definitely not going to join the team, leaving John with one runner: and she's asthmatic. 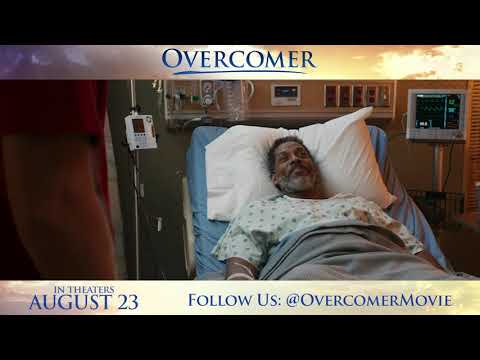 If that doesn't sound like the makings of your favorite movie, just wait. Overcomer is absolutely outstanding! It had me early on when Cameron Arnett, playing a blind man dying of diabetes and its complications, had his first scene, but his work kept getting richer and deeper! And the Kendricks connect the dots so beautifully! The way they tie identity into the storyline is stunning. In a world that doesn't know what it is anymore, everyone really does need to see this film.

At the New York Media Initiative, Shari Rigby shared with us the dramatic story of her getting the role of John's wife, and she showed the human side and the Spirit-filled side of a wife who is there for her family and the Kingdom.

Aryn Wright-Thomas makes her film debut as Hannah Scott. Her IMDb bio says, "Aryn Wright-Thomas is an actress." That's it, but she sure is! Alex and Beth brought out some fine performances from her, as she takes us on several emotional roller coasters. She helps define another important theme in the film: The importance of fatherhood. One of my favorite sermons I ever heard --by John Langlois when he served as the director of pastoral care at the MasterWorks Festival--was on the Father Heart of God. He pointed out that we all have imperfect fathers. They might be absent, delinquent, or abusive, but even if they're great, they're still imperfect. Priscila C. Shirer plays the school principal, and she basically brought the final message of John's sermon to Hannah: God is the perfect Father.

The Kendrick Brothers are used to taking chances on first time actors when the the Lord directs them to do so. I heard Stephen Kendrick speak at the Christian Worldview Film Festival, and he told how Sony wanted to know who would be playing the lead in War Room. They were shocked to hear Priscila C. Shirer had zero acting credits on stage or film. But she's been moving audiences for years as an author and speaker, and she got to bring home the scene that moved me the most.

After reading this review as it was first posted Beth said,


What many do not realize when they see great performances is that most of the work is done in casting well, which Alex certainly did. And while it’s my job to run the actors through their paces in pre-production rehearsals and to encourage them on set, Alex’s excellent direction and the actors’ hard work is where credit is due. Bottom line is, God gets the glory for bringing this incredible cast and crew together for such a time as this. My favorite film for 35 years was Chariots of Fire. It was the film that inspired me as a cross-country and track runner. If I were still running competitively Overcomer would be my Chariots of Fire. The climax of the film is one of the best cinematic moments I can ever remember. All I'll say is that I heard my coach, Hans Voskes coaching me on when Hannah was in the big race! When Stephen Kendrick spoke in 2013 he mentioned being inspired by Chariots of Fire and wanting to do a sequel. I ran, well, I pushed my way through the crowd to get to him to tell him I was working on a screenplay based on my one-man play Beyond the Chariots. Though Joseph Fiennes beat us both to the finish line on that one, I'm glad Stephen got to do something that moved this Chariots of Fire fan as much--I truly think more--than the original.

After a long applause in the AMC Empire Theatre on Times Square someone--and no, it wasn't me--shouted out Academy Award! Chariots of Fire won four. We live in a very different world today, but I really hope Overcomer gets the recognition it deserves.

I haven't read any secular reviews. I'm sure some of them will say the transformed lives it shows are unrealistic, since they won't be able to knock it on any artistic merits. But for those of us who are intimately acquainted with life transformation, it's spot on.

Click below to watch the trailer, or if you're getting this in an email, visit www.RichDrama.com/Overcomer.