SWONEKY and the Ark Encounters


We were SO blessed to be a part of the ministry team at the Salvation Army's Southwest Ohio Northern Kentucky (SWONEKY) Divisional Family Camp this past weekend.

I performed Big Fish Little Worm on the lawn and The Acts indoors. Joyce and I also got to teach enacted prayer, and we were able to do an enacted praise and prayer for Colonel Janet Munn, who needed to leave early. That was very special for our group, and after seeing our recording she wrote, "Thanks very much for this generous act of prayer on our behalf."

In The Acts one of the characters describes how a violent wind entered the room where the followers of Jesus were gathered on Pentecost. Just hours later, Commander Janet Ashcraft was building upon the theme of her husband, Commander Larry Ashcraft, and bringing home the theme of the whole retreat: Bold Action. At that moment a violent wind swept through the open sides and back of the auditorium, designed for summer events. This is the way Colonel Richard Munn described it:


...quite suddenly a violent wind disrupted the scene in Chamberlain Hall, flags crashing, music stands cascading, music sheets swirling around the room. What a visual aid, then again, just maybe, a sign - Swoneky Division: Bold faith. I love it. 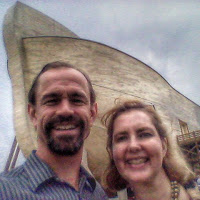 The next day Joyce and I got to visit the Ark Encounter, a replica of the ship that carried Noah and his family to safety after the worldwide flood described in Genesis 6-7.  The Lord gave the specifications to Noah in cubits, which is the measurement from a man's elbow to the tip of his longest finger. There were twelve possible lengths the creators of the Ark considered, and they went with 20.1 inches per cubit. That makes it 510' long, 85' wide, and 51' tall. That took 3.3 million board feet of wood, making it the largest wooden structure in the world... today. There's a display that mentions many of the flood stories from around the world. The Ark is the only structure that actually could have survived a worldwide flood.

Another display shows photos of Mars. Scientists point to many features of the landscape that indicate Mars had a worldwide flood. They pointed out that if a worldwide flood were not mentioned in the Bible scientists would all conclude that there was one here, too. But that would wash away one of evolution's primary tenets: that the striations we see in places like the Grand Canyon were developed over millions of years. Creation scientists believe those layers were created as the floodwaters rose. It makes a lot more sense to believe striations would come from a catastrophic event rather than over great epochs of time, during which erosion would blend layers together, and in fact we have evidence of this at Mt. St. Helens, where identical striations were created in a matter of hours after its eruption in 1980.

The entire display is very well thought out, down to the number of bats on board! The Lord sent Noah two of each kind, male and female. Creators of the Ark take the word "kind" to indicate any group of animals that can produce offspring with an animal of the opposite sex within that kind. So they only account for two dogs on the Ark, since all varieties of dogs can interbreed. The Lord also sent Noah seven pairs of clean animals and flying creatures. Since there is no scientific proof that all bats can interbreed they have 75 varieties of bats on board. I guess I should add that they're not real, though there's a limited zoo on the premises we didn't have time to see.

Advances in science are making it more and more clear that there had to be a Creator. For more on this watch our friend Eric Metaxas' talk, Science and God. The Ark Encounter opened on July 7, and by the time we visited, less than two months later, there have been over 100,000 visitors discovering these facts secular media would rather ignore.

There we encountered four different friends! As soon as we stepped into the line we ran into Adra Cooper, who was in The Unexpected Bar Mitzvah with us, and Providence with me. Jonathan Ludwig worked on Polycarp with me. I went in knowing two people who had worked on the Ark, and by the time we were done we knew of six, including Adra and Jonathan.

In the living quarters (you can see Noah climbing to retrieve the dove with the olive branch behind us) we ran into Ashley, who used to attend our church, Westchester Chapel.

Then, moments after seeing a wonderful display on the great missionary to China, Hudson Taylor (part of a temporary exhibit, The Voyage of a Book: Personal Stories of Taking the Bible Around the World), we ran into the grandmother of Hudson Taylor ... Graber, the newborn son of Stacie and Joseph Graber, who directed and produced Indescribable, in which Joyce and I played the parents of nine.

Ashley and her friends let us know that we'd missed all the cellphones simultaneously going off with a FLOOD WARNING! We also missed this double rainbow, which appeared beyond the Ark shortly after we left...


You can see more of our photos from the Ark Encounter by clicking here.

Within an hour of posting this, the number of people we know who worked on the Ark was raised to ten.

Thanks for showing me this.