Hope you had a Big Bold Memorial Day Weekend!

Go Out and Glow!

I got to open our service this morning at Westchester Chapel. I make reference to "O Praise Him," which is by the David Crowder Band. Joyce closes the service.


Pastor Rachel Taylor preaches on Exodus 34. As a follow-up to Pastor Linda Warren's sermon "Welcome to My Tent," Pastor Rachel illuminates the result of inviting the Lord into our homes and lives.

Welcome to My Tent

I estimate that I've heard over 2,000 sermons in my life. This one is among the very best. It's going to transform my devotional life...

From the largest Off-Broadway to the smallest Broadway theatre 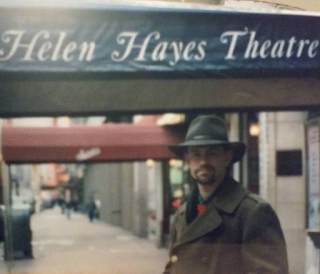 On October 17, 1999, I quit my office lease at The Lamb's Theatre, the largest Off-Broadway house at the time, and crossed Times Square (from 130 W 44th to 240 W 44th) to sublet the office of John Forbes at the Helen Hayes Theatre, the smallest Broadway house.

During the three months I was performing in Singapore in Judah Ben Hur, John returned, and I was then able to do an office share with a former stage manager for Les Misérables, who later moved out.

In May of 2012 The Helen Hayes celebrated its centennial. I know what week it was because after the ceremony I was able to tell Mandy Patinkin that one of our pastors used him in a sermon illustration that Sunday! You can hear it here. There's an illusion to his work in The Princess Bride, but Pastor Warren revisits Patinkin's story throughout. The third reference is the most powerful.

I'm sad to leave this very special place behind, but we've creatively redesigned our space so that now Joyce and I are both officing at home. There's great delight in spending our days together. :-)

I got to open and close this morning's service at Westchester Chapel. Pastor Jim Warren preaches on Exodus 32 with illustrations from Acts 7:51-53 and John 15:1-11, and cartoon illustrations pictured here. Pastor Rachel Taylor prays and shares announcements. 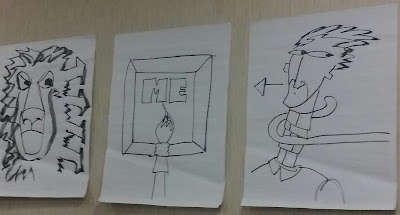 A Matter of Perspective

Mike Hill was nominated for Best Director for a Short Film, and I won Best Lead Actor in a Short Film at the International Christian Film Festival for playing Garreth in "A Matter of Perspective."

You can order your copy now:

Be sure to watch the extras, which bring out how the Lord was so involved in this project!

It was filmed in beautiful Southern Oregon, where I was born and raised. I got to stay on our family farm while we were filming!

This was such an answer to prayer, since that was the area where I was inspired to act by seeing plays produced by the Oregon Shakespeare Festival, taking part in workshops with their actors, and performing at our high school and with our church's youth group.

This was also the fifth film in which Joyce and I got to play husband and wife. Though you won't see her on screen, it's her voice at the end, talking to our characters' progeny, bringing us up to 20 screen children! My connection to the filmmakers of "A Matter of Perspective" is miraculous! We met at the Family Camp for the Southern Oregon chapter of Joni and Friends. To see how that came about visit www.RichDrama.com/Joni. Then we found out that the director, Mike Hill, was a student of Larry Smith, who has been a good friend of my father since they were in the third grade! Larry gave me my only photography lesson just before I went to Hong Kong in 1987. Then he helped me set up the slides that I showed to the many families and organizations that made the trip possible.

I'm really looking forward to seeing what the Lord does through this short film! Oriented Up (Fellowship and Abraham, Part 3)

This morning our church, Westchester Chapel, closed out a three part series-within-a-series on Abraham, so I posted a sketch on the Abraham story I helped developed through sociodrama by at the Grace Brethren Church of Winona Lake, Indiana, in 2012:

Rachel Taylor teaches on Genesis 22. Dr. Linda Warren opens with a report on how much the Lord has been fulfilling His promises He gave when we went through our last sermon series, Moving into the Holy Spirit's Gifts. Pastor Jim Warren leads worship and reads Psalm 141:1-2.