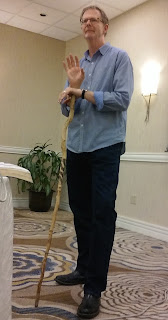 Due to an unfortunate recording error I got to summarize the end of a sermon on my favorite passage in the Old Testament, Genesis 15, a passage on which I have a short 1-man play, "The Covenant Keeper." Pastor Jim Warren preaches most of the sermon with supporting illustrations from Isaiah 6:1-7, Hebrews 11:5-8, and James 2:23. He gave me permission to summarize the end of the sermon. Pastor Linda Warren prays and shares announcements.

As promised, we do have information on our upcoming District Assembly and Pastor Rachel Taylor's ordination on our site. You can find it on www.WestchesterChapel.org/DistrictAssembly.

Here's an official music video of Your Great Name, one of the songs we sang this morning:

The Screenwriters at Patrick Henry College

I had a great time at the screening of The Screenwriters at the alma mater of our director, Peter Forbes, and screenwriter, Elizabeth Stinnette. I was honored to join them and producer David Cook in a Q/A after the show, and we all had a blast at the afterparty. I had to leave early though. The screening just "happened" to have been scheduled the night before I performed and taught in a nearby school. 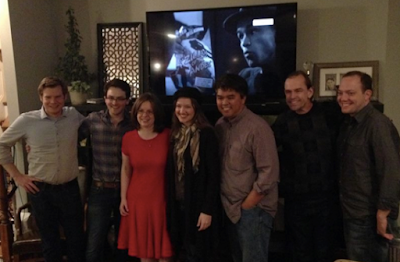 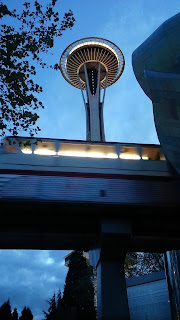 I closed this morning's service with a story from my recent trip to Seattle. Here's my post about the Divine appointments between Beijing and Phoenix, Oregon: What Are the Chances?

Pastor Rachel Taylor preaches on Genesis 12:1-9, with an illustration from Hebrews 11:8. The service opened with Angie Atoth sharing about Pastor Randy Solomon's trip to Columbia during which they built a home for three orphans. Pastor Linda Warren prayed over the sermon and shared the announcements.

I performed the role of a driver and got to serve as the acting coach in One Day, a short film written and directed by Gwendelynn Martindale, who was a student at the Rocky Mountain Christian Filmmakers Camp, where I teach and coach each summer.

You can order it here or stream it here.

After we were done, we sat around a table and passed around a sheet of paper to record all of the miracles we'd witnessed in the creation of the film. Here's what we came up with:
Here is a list of just a few miracles and ways God provided for this film:
• The schedules of such a great and talented company came into alignment.
• Stacey was healed in time for her scenes.
• A Glorious sunset when we needed it.
• We finished the scenes Saturday a half hour early!
• We had a tight schedule and finished on time!
• We had two roads blocked, all of what we hoped for and more!
• Gwendelynn had sustained energy and heath, despite fighting a wisdom tooth surgery infection and a heat rash
• Safe travels for everyone! No deer hit.
• Storm disappearing [Gwendelynn's grandfather watched the storm move around us on his doppler device.]
• Provision for multiple aspects of the film
• God’s blessing and guidance
• Unity of spirit and JOY
• Getting to work on this short film.
• Speeding and did not get caught. (not sure who wrote this line)
• Benjamin survived falling from the top of the playground at the park
• God’s abundant energy that came from everywhere.
• A sweet spirit of unity and encouragement among the cast and crew
• Tears for the scenes lasting longer than possible.
• Traveling safety
• The patience and love on set was amazing!
• Fixing the crane
• Rain stopped for crane shot on Friday when it was supposed to rain all day!
I know there were many more than these but let’s praise God for his mercy and provision for this film.
It was a joy to work with Gwendelynn in both capacities, and I have a lot of friends I got to work with again: It was be my sixth collaboration with both Tim Kaiser (www.RichDrama.com/TimKaiser) and Stacey Bradshaw (www.RichDrama.com/StaceyBradshaw), and my tenth with Rebekah Cook (www.RichDrama.com/RebekahCook).

Ashley and Ethan Ledden are be doing the visual effects, which is particularly exciting since they worked on Beyond the Mask, which had the most visual effects of any Christian film. I first worked with them on Alone Yet Not Alone, and then again on Indescribable. They'll be supported by Jonick Petry, who I worked with in London for The Dragon and the Raven.

Rick Holets is doing the score. We share two credits (Princess Cut and Firefly), but he's worked on several films made by friends.

The fact that Nathan Ashton is doing the sound on this project is actually an answer to our prayer that (if all goes well) we'll be in another film screened at the Christian Worldview Film Festival. We haven't missed a year!

It's impolite to ask a woman her age, but I don't think Gwendelynn is in her twenties yet. For her to pull together this heavy-hitting team is miraculous in and of itself! Then again, we're serving the Miracle Maker!
[Note from February 4, 2023]:
I thought of this film after seeing a film I just reviewed: Living, because of the similar theme. Gwendelynn has the kind of purpose both films present as more satisfying than anything that could possibly catch our attention. I don't think she spent a dime on any of the vehicles used in "One Day." With great purpose she went after them and got them!
I want to thank our dear friend who recommended Living. Judith, if you want to be surprised, don't highlight this next bit. The rest of you can see how we were moved to action by clicking and dragging across this "blank" sentence: Immediately after watching Living we ordered Judith The Purpose Driven Life. Then I sent her the link to this page. I also texted her the following quote I'd seen on a tea tag a few hours before watching Living:

The great and glorious masterpiece of man is to live with purpose.
--Michel de Montaigne

I play a lead in Providence, which opened in AMC Theaters coast-to-coast.

All in a day's work

Had a fabulous time performing a monologue from Hamlet, my 1-man piece based on Les Misérables, and sociodramas based on parallels the students observed. We talked a terrorist into dismantling his bomb, empowered someone to talk his friends through a rough situation, and helped someone avoid drugs. Not bad for a day's work, eh?

Find out more about sociodrama at www.RichDrama.com/Workshops.

Rather to Be Chosen, NYC

We had a great time at the advance screening of Rather to Be Chosen. Cast and crew came to NYC from Detroit, Providence, Long Island, and the after party went longer than the film!

Here's the report I sent out to New Yorkers on our list. If you you're in the NYC area and the report isn't in your inbox, you can sign up for future updates at www.RichDrama.com/UpdatesNYC. I hope you will because we're planning an advance screening of The Screenwriters, in which I play Hollywood Director Forrest "Woodsy" Woods.

Don't we often struggle to find just the right words to say when we're trying to communicate with someone? But, real communication goes so far beyond saying the "right words."
In 2008, I was performing in Beijing during the Olympics. While I was there, I got to hear Madeline Manning Mims speak. Madeline, who broke the world record in the 800 meters in 1968, told the following powerful story.
During the 1968 Games, Madeline was racing against a woman from an Eastern Bloc nation. When Madeline broke the ribbon, she looked around to see where the woman placed in the race. She was nowhere to be found. Madeline discovered the woman had been warned that she and her family would face great penalties if she didn't return with a gold medal, so the woman had peeled off the track before reaching the finish line and ran to the highest point of the stadium. She was going to throw herself off the stadium wall. Thankfully, someone found her and brought her back down.
The next day as Madeline was heading to the U.S. team bus, she passed by the woman. She felt a strong desire to connect with her, so she told her teammates she'd catch the next bus. As Madeline returned to the woman, it dawned on her that she didn't know a single word in the woman's language, and it was very unlikely that the woman knew any English. So, Madeline just walked up to the woman and smiled.
Later, Madeline read that the woman had been institutionalized, not speaking a word for years. After she was released, Madeline was able to visit her. The woman ran up to Madeline and gave her a big hug. The woman told Madeline that her road to recovery had begun when she broke her silence and said, "Madeline came back."
So, the next time you find yourself searching for that perfect word, remember the power of the non-verbal. Lives can be changed with a smile.

You can read the full Big Bold News here.

Since 2001 I've been a Freedom Finder for Graceworks, helping people become more comfortable as presenters through workshops and project specific coaching.

Find out more about our work and sign up for future issues of Big Bold News at www.GraceworksInc.com.

This morning at Westchester Chapel Pastor Jim Warren preached on Genesis 6 and 7. Unfortunately there was a recording error. Thankfully Joyce took detailed notes and below you can hear her authorized summary of the sermon using some of her own illustrations. Pastor Linda Warren opens the service, inviting people to offer their thanks to the Lord, and that opens the recording. Rich Swingle thanks the congregation for praying for him while he presented at the Christian Worldview Film Festival and Guild. He shares reflections on an article by Richard Munn and closes with a review of God's Not Dead 2 and an invitation to an advance screening of Rather to Be Chosen in NYC.

The Beginners Bible video of Noah is now available on DVD in which I give Noah's son Shem and a nay saying villager.