I'm praising the Lord that I got to perform in all three films which won the top prizes for independent features at the Winnipeg Real to Reel Film Festival: Polycarp, Princess Cut and Beyond the Mask.

I play a lead in Providence, a modern silent film that could come to a city near you soon!

Risen Is an Answer to Prayer

It has long been a prayer of my heart that there would be a Jesus Film that speaks the heart language of our culture. That prayer has just been answered in the film Risen.

Joseph Fiennes (Luther) plays Clavius, a Roman tribune, who is charged with finding the body of Yeshua (the Jewish name for Jesus). He worships Mars, but during his investigation he encounters followers of Yeshua who seem to truly believe that He is risen from the dead. At one point he goes to the statue of the god Mars and says he's not praying to Mars but to Yahweh. Of course his prayer, at that point, is against the will of Yahweh. Later he goes to the statue of Mars and, in one of the finer moments for the award-winning actor, sees it for the metal that it is.

I think the best acting actually comes from one of the guards, telling the story he's been paid not to tell. I found it much more compelling than a CGI recreation of what could never be captured for a film: The Resurrection.

Peter Greif, who plays Caiphas, played the Danish King Guthrum in The Dragon and the Raven. I got to perform two scenes with him in London. In one I served his character, and in the other he crushed my second character's neck. The protogé of Sir Laurence Olivier is almost as fierce in Risen, as he presses Pilate (played with layers by Peter Firth) for favors to prevent the true story from being released to the "weak." The word is a beautiful counterpoint to strong Clavius, following, by turns, what his eyes and mind cannot reconcile.

I got to see Risen with members of the creative team, including Fiennes. My favorite scene of the film is the same as his. He climbs up on a rock to speak to Yeshua. It was the first scene he'd filmed with Maori actor Cliff Curtis. Fiennes told our audience that they intentionally stayed apart on set before the camera rolled to highlight the encounter.

My prayer was answered for the film to be created. Now I'll keep praying that the Lord uses it to reach our cynical generation.

There's a beautiful moment when Clavius is interviewing a blind woman (played insightfully by Margaret Jackman). He asks her, "Are you a follower of Yeshua or a follower of a follower?"

If you've only followed followers of Yeshua this movie is for you, too. Seek the Son of God and you shall find Him.

Here's what I said about it in this morning's service at Westchester Chapel:

Providence Gets Noticed throughout China! 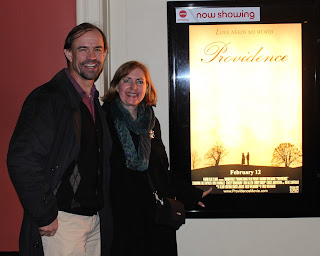 I've just added a talkback after the final screening of Providence at the AMC Empire Theatre on Times Square, TONIGHT at 7:10PM. I play a lead role in this modern silent film, told only through visuals and an eclectic indie soundtrack.

A couple of weeks ago I got to join Jenn Gotzon for a press junket at The Roosevelt Hotel in NYC. The word has spread throughout China! The articles below represent hundreds of millions of readers, and all but one of them use the above photo and all of them mention Providence and the other films I've performed in with Jenn: Princess Cut, Alone Yet Not Alone and The Screenwriters (which will be shown at the Christian Worldview Film Festival next month).
Though Providence was extended for a week in Atlanta, there are only two screenings left today in NYC. If you're in the area, I hope you can join us tonight at 7:10!

These articles we know about have a combined readership of about 500 million:
Vogue China

Lifestyle Channel (lohas) of China.com.cn (Run by Information Office of the PRC of the Chinese State Council)

Today's Headline, the most famous news screening and analysis APP in China, with 350 million subscribers

News.CNStock.com.cm, a leading finance and security website for business people (Doesn't use the above photo, but does mention Providence and the other films in which I've performed with Jenn)

I play a lead in Providence, a modern silent film playing in theatres coast-to-coast now.

Lay Down Your Life for the Lord 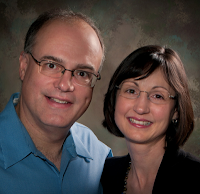 Pastor Randy is preparing for a short terms missions trip, and team members Angie Atoth and Glenn Romano thank Westchester Chapel for our contributions toward the trip and share some more details about the work they'll be doing to build a home for three orphans. Liz J. prays over their team. 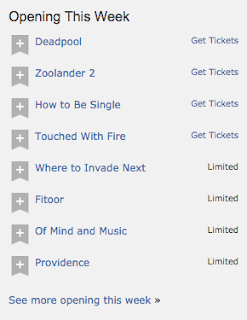 I was on IMDb, the go-to site for all you want to know about films, and there is Providence on the front page!

Earlier we made their

We also made the list for Rotten Tomatoes and Fandango's Valentine's Movie Guide.