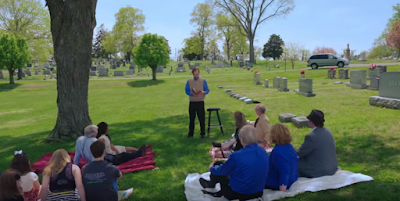 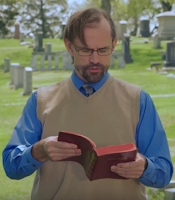 Our church, Westchester Chapel, decided to cancel today's Bible study and service since the blizzard prompted the governor to declare a state of emergency for our region. The sermon planned for today will be preached next week, so for this morning I've recorded the sermon I prepared for Providence, in which I play Pastor Mitchell Little. It's a silent film, but I wanted to be preaching a real sermon when the camera was rolling. I never got through it when we were filming, so I promised my screen congregation that I'd record the whole thing and post it online. Today seemed like a great day to do that.

The photos are stills from the film (used by permission). My character was preaching an Easter message in the cemetery where he first encountered Rachel, who used to own the Bible from which he's preaching.

As you listen, keep in mind that I'm preaching in character, and there are elements of the sermon that will make more sense if you've already seen the film. :-)

[Note from 2020: The fact that this film played at the AMC Empire Theatres on Times Square was an answer to a specific prayer.]

Shelley Jennings - The Love Of God from bobmarshall on GodTube.

AWESOME GOD BY RICH MULLINS from mylordjesus1 on GodTube.

This music video shows excerpts from the sermon in the film...


Here's the trailer for Providence, which is being shown now in theaters that will host the film starting February 12, 2016...

I play a lead in Providence, a modern silent film opening in theaters coast to coast starting February 12, 2016.