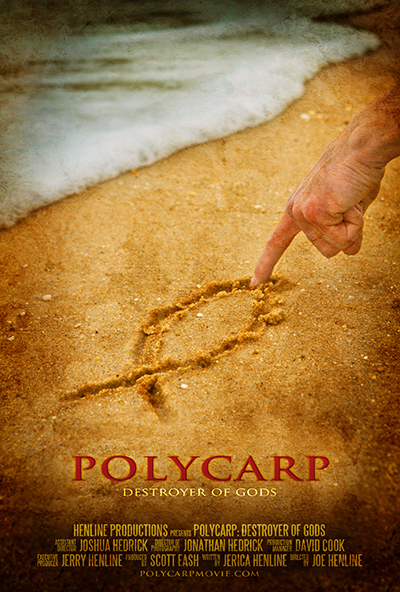 I'm thrilled to have played the role of a slave auctioneer in the film Polycarp: Destroyer of Gods. It follows the story of Polycarp, who ministered alongside the Apostle John, who's story I tell in my one-man play The Revelation. I'm actually thrilled to play someone involved in the slave trade, because I pray it will bring greater awareness of the realities of the modern human trafficking. Another of my one-man plays tells the story of John Woolman, a Quaker who spoke against slavery a century before the Civil War: A Clear Leading.

The film's world premiere was February 20, 2015, at the Creation Museum. It's now available to be screened in churches. Click here to register to show it at your church. And you can now find it in Christian bookstores nationwide and can order it online at www.HenlineProductions.com.

ChristianCinema.com posted a thoughtful review of the film: Polycarp: Exposing the Vanity of Fear.

The Cincinnati Enquirer ran a great article on the Henlines and how Joe and Jerica, and later this film, came to be: "Local pair produce award-winning feature film."

The film received the "Family-Approved" and "Faith-Friendly" seals from The Dove Foundation. You can read their review here: Polycarp.

Here's Indy Christian Review's take on the film. I got to reprise the role of the slave trader in the opening sequence, filmed at The Rocky Mountain Christian Filmmakers Camp. Read why that was so great for our students here.

Yesterday the Lord worked a series of miracles to push away most of the rain and allow them to wrap Stacey Bradshaw﻿ on time so she could return to the set of Uncommon with Eric Estrada of CHiPs. My friend and MasterWorks Festival﻿ alum, Danny Cornett﻿, and his father, Pastor Larry Cornett, came to pick me up for dinner, and they said that while they were driving here it was pouring down rain. Then it suddenly stopped and a double rainbow came out. When they arrived on set and heard about all the prayer that was going up the sudden change in the weather made perfect sense. #LifeInTheSpirit

Jerry Henline is the father of Jerica and Joe Henline﻿. Joe is directing, and Jerica wrote the screenplay and is abuzz on the set, though she doesn't have an official title during this phase of production. Jerry runs the manufacturing plant where we're filming, and it turns out that 18 years ago Pastor Cornett did a devotion at this plant and Jerry remembers that the scripture was Proverbs 22 and the theme "A good name is more desirable than great riches." Then it was at a seminar hosted by Pastor Cornett that the Henlines were convinced that the Lord was calling them to have more children, a decade after the youngest child had been born. Those children were Joe and Jerica, so this film is fruit of that obedience. So it's no surprise that Pastor Cornett's son, Scott, who worked at this plant many years ago, is going to have a role in this film, as will his wife, Annette﻿ and daughter Audrey﻿, who was in the MasterWorks theatre program twice. In fact, Audrey will be in my scene!

Jerry wrote about the miracles surrounding the births of Joe and Jerica in his book Spiritual DNA.

I am so proud, yet humbled and honored to have had a role in this movie! Today was the WORLD PREMIERE in Cincinnati! and I have to say it was BEYOND AMAZING! Production value was top notch all the way through!! Everyone I went with agreed! Every single aspect! Lighting, audio, editing, directing, cinematography, blocking, props, makeup, set design, performances, wardrobe, I know I'm missing something, but I'm just mentioning a few... The story was edited and moved masterfully! Pacing was great! You will WANT to see this one, and SO WILL YOUR CHURCH! Polycarp was real, the message is real! Thank you Joe and Jerica Henline and the entire team of Polycarp! God bless you all, Hope to work with you all again!
--Gary Bosek
Actor, Director, Filmmaker