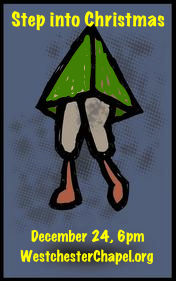 On the first Christmas God stepped into our story. This Christmas Eve you have a chance to step into God's story.

Westchester Chapel Church of the Nazarene (www.WestchesterChapel.org) is hosting a bibliodrama of scriptures that tell of the birth of Jesus Christ.

Rich Swingle (www.RichDrama.com), who has performed and/or taught bibliodrama (among other forms of drama) in 25 nations will take participants to Bethlehem via The Crowne Plaza in White Plains, NY, where the church meets.

No one will be forced into the enactment, but all will be invited to walk in the sandals of those who were there and explore what it must have been like for humans to encounter God as He joined us as a baby in a feeding trough for animals. No memorization is required. Those who take part will read scripture and talk from the heart as they explore the subtext for those whose lives were so profoundly changed that night.

Bibliodrama was developed in Germany shortly after World War II, and separately in America in the late '80's by Peter Pitzele, Ph.D.: www.Bibliodrama.com. Its form is inspired by sociodrama, developed by Jacob Moreno in Vienna in the '20's. Swingle's thesis for his masters degree from Hunter College, NYC, was focused on sociodrama. Swingle has taught at more than 30 colleges and universities including an annual presentation skills workshop he leads with Graceworks (www.GraceworksInc.com) at Princeton University. He also spoke on a panel at the Congress on Faith and Action for students of all Ivy League Schools, hosted by the Christian Union at Harvard University: www.RichDrama.com/IvyLeague.

Several members of Westchester Chapel did a bibliodrama atop Mt. Nebo in Jordan as a part of a Christians in Theatre Arts (www.CITA.org) trip to Jordan and Israel. Tom Michael played Moses, and Swingle interviewed him as he looked down one side of the mountain to see the rock that he struck in anger, an action that kept him out of Israel, which can be seen from the other side of the mountain top. A gentleman approached the group afterward to say, "That man (Tom) really knows God. How is that possible?" 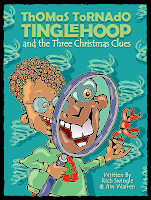 Before the bibliodrama Swingle will perform “Thomas Tornado Tinglehoop and the Three Christmas Clues” (www.RichDrama.com/Tinglehoop), a children’s book he co-wrote with the illustrator, Jim Warren, who was the founding pastor of the Westchester Chapel.

Join Westchester Chapel Monday, December 24, at 6pm at The Crowne Plaza, 66 Hale Ave, White Plains, NY, to experience the Christmas story in a whole new way. Christmas carols will be a part of the event.

Email ThisBlogThis!Share to TwitterShare to FacebookShare to Pinterest
Labels: Bibliodrama