Joyce Swingle played the role of Mrs. Lehman in the upcoming film Indescribable, and she performed her own one-woman play "The Shepherd's Daughter" in the Shepherd's Cave of Bethlehem (see below). She has performed in numerous sketches with her husband, Rich Swingle in the US and Jordan.  She is a pastor at Westchester Chapel, and she has preached around the country and in Malaysia, Israel and Taiwan. To hear samples of Rev. Joyce's sermons, click here.

She earned a Bachelor's degree in Journalism from Northwestern University, spent more than 20 years in corporate America, working in the publishing industry for magazines such as Newsweek, Time, People and Fortune. She left her position as a Vice President for BusinessWeek magazine in 2006 to pursue her call to ministry. She has attended acting workshops with Bev Holloway (casting director on over 30 films including Bobby Jones: Stroke of Genius, The Ultimate Gift and October Baby), Carol Jaudes (CATS on Broadway), John Kirby (acting coach on over 20 films including Count of Monte Cristo, Narnia: The Lion the Witch and the Wardrobe, and director of Word of Promise Next Generation with Anna Sophia Robb of Soul Surfer and Sean Astin of Lord of the Rings), Curt Cloninger (world-wide performer of his own one-man plays), Patricia Mauceri (Julliard trained actor of theatre, film and television who has starred opposite Johnny Depp, James Earl Jones and Richard Dreyfus) through the MasterWorks Festival where she serves as Director of Pastoral Care.

October Baby Movie is phenomenal! It was a packed theatre on Times Square that gave it a long applause when it was over. Almost everyone stayed for the interview during the credits. Kudos to Beverly Kennedy Holloway, a Masterworks Festival master class instructor, for pulling together a wonderful cast. Jason Burkey, who performed with me in The Screenwriters and For the Glory, was terrific!
Posted by Rich Swingle at 3/23/2012 09:34:00 PM 1 comment:

I play a quirky clerk in Christmas Grace. It's a wonderful story of forgiveness and... well, grace. I sob the whole third act every Season.

You can see it on TV throughout the Christmas Season.


The director, Keith Perna, worked on Indescribable, though he was done before Joyce and I arrived on set. Three other Indescribable team members worked on Christmas Grace: Adam Terrel, Timothy Jones and Rebekah Cook. Rebekah worked with me on Alone Yet Not Alone, tipped me off to Indescribable, and cast me in The Screenwriters. I was in Detroit early March and got to help with some scenes they were filming, including one with MasterWorks alum Brandon Langeland. There was a bit of a buzz on set about the nice work he was doing, and he gets some great screen time in the trailer.

I also got to catch a ride from set with Daniel Knudsen who was running one of the cameras. He directed a film everyone on the set of Indescribable was raving about: Creed of Gold. Later Daniel picked me up at the Detroit Airport for a Christians in Theatre Arts conference. He asked if I would play the voice of a reporter for Creed of Gold. We pulled into a parking lot, he turned his car into a recording studio, and now I have a credit in the film! 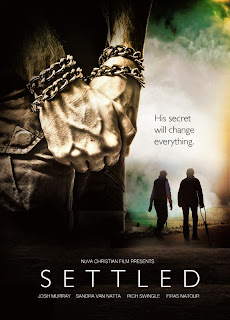 Josh Murray, who asked me to audition for the film reported from the 168 Film Festival:

I heard that word (awesome) and I think "amazing" countless times last night about all aspects of the film. Many talented film makers said it was their favorite of the night. You guys should all be (humbly) proud of your work :) ... Also the cinematography looked amazing on that huge screen!

I've directed the theatre program at the MasterWorks Festival since 2005, and over the years we've watched the quality of our actors grow consistently and steadily as they've worked with world-class Christ-centered instructors like John Kirby (acting coach on over 20 major motion pictures including Narnia: The Lion the Witch and the Wardrobe, Disney's Prom, and he directed Word of Promise New Testament Youth Edition with Sean Astin of Lord of the Rings and Corbin Bleu of High School Musical), Ken Wales (producer on Amazing Grace, Christy, Breakfast at Tiffany's) and many others. At a certain point I started bringing Bev Holloway, a Hollywood casting director, who's worked on over thirty projects including Bobby Jones: Stroke of Genius, The Ultimate Gift and Like Dandelion Dust with Barry Pepper and Academy Award winner Mira Sorvino. Bev has joined us four years.

We feel like we've reached another milestone as we're bringing this summer's production of The Jeweler's Shop to New York City, where we'll perform it in an Off-Broadway theatre. We'll be inviting agents and casting directors to see the talent we've been developing over the years. We'll rehearse the most popular play of Karol Wojtyła, who would become Pope John Paul II, in Winona Lake, perform it for the full Festival, and then perform it in the Pittsburgh area before moving on to New York City.

As soon as we arrive in New York we'll be joining a Bible study for Broadway actors, and an exciting meeting with Mastermedia members is also in the works. Before we leave for New York, Phillip Telfer, who wrote, produced and directed a recent documentary called Captivated will be sharing with the whole Festival. We heard Phillip speak to the cast and crew of Indescribable, the film in which my bride, Joyce, and I played the parents of nine. The documentary wasn't complete last summer, and in fact Phillip interviewed at least one crew member on set. But his talk was so spot on for many of our goals for the theatre program I'm excited that he'll be speaking to us and sharing his documentary. Captivated, now complete, was featured at the San Antonio Independent Christian Film Festival, where it was runner up for Best Documentary and an Official Selection as a finalist for Best of Festival, which was won by Courageous. We'll be seeing Freud's Last Session, which imagines a conversation between Sigmund Freud and C.S. Lewis, and afterward the actors and creative team will treat us to a talk-back.

Patricia Mauceri (who's performed on television, film and Broadway alongside Christopher Plummer, Johnny Depp, Richard Dreyfus and James Earl Jones) will be joining us for her seventh straight year, and this time she'll be able to work with our students for the full month.

We've already had as many women apply as we'll need, but we're still looking for a few good men. Click here for application requirements. If you're interested, move swiftly. We'll start making our selections for men (16-30) after March 31, and you'll need to order the script before uploading your audition.

The Festival begins June 16 and will run through July 15. For more information visit MasterWorksFestival.org/theatre.html.

We're looking forward to your auditions!

The Controversy of the Cross

Pastor Joyce Swingle points out the links between Psalm 22, the temptations of Christ in Matthew 4, and His Crucifixion in Matthew 27. She illustrates with stories from her own walk with the Lord, challenging listeners to stay on their cross, to allow the Life of Christ to flow through them.

This service is available for download free on iTunes, where you can also subscribe to our podcast. Search for "Westchester Chapel" on the iTunes Store.
Posted by Rich Swingle at 3/11/2012 09:34:00 PM No comments: