"The performing arts are a powerful communication instrument, and, by and large, they have been used by people who don't know God to encourage people to worship gods of their own making," said Rich Swingle, an actor based in New York City.  Swingle wants believers to "take back the entertainment industry and tell stories that point to the One True God."
[Read the rest of the article]

My talk at the Congress can be seen at RichDrama.com/IvyLeague.

Email ThisBlogThis!Share to TwitterShare to FacebookShare to Pinterest
Labels: Massachusetts As we walked into the theater I stopped Joyce and said, "We've been praying for this moment for a very long time!" So we stopped and praised the Lord for my first nationwide theatrical release!

We noticed improvements since we saw it screened at the San Antonio Independent Christian Film Festival last year, and we recommend it for everyone mature enough for PG-13 war violence.

Here's an endorsement by Dr. James Dobson, who's organization, Focus on the Family reviewed the film:

And here are things folks said after the show, as interviewed by co-director George Escobar:

I performed the role of a land speculator in this amazing true story of two young girls who were abducted by separate tribes during the French and Indian War.

It opened in select theatres, last October, and had the highest box office take per theatre of any film in America that weekend.

They made a number of cuts, including my scene, but they've retained one of my lines in a flashback. Hurrah! Hopefully they'll put the whole scene in the extended scenes of the DVD.

The title song from Alone Yet Not Alone was nominated for an Academy Award! Then the nomination was taken away because the composer, Bruce Broughton, emailed his friends asking them to listen to the song. It's common practice, and Bruce received many such emails over the thirty years he was serving the Academy. Our prayer is that the heightened publicity will make more people aware of the film, so that it's message of hope will bless even more.

Joni sang the song at the Movieguide® Awards on the Reelz Channel:

Here's what I wrote before the nomination was rescinded:

It's sung by one of my childhood heroes, Joni Eareckson Tada, and written by Dennis Spiegel and Bruce Broughton. Executive director of the film and MasterWorks frequent MasterClass instructor Ken Wales talked his friend Bruce into writing the song that got him his second Oscar nod, the first being in 1985 for the Best Music, Best Original Score for Silverado. The nomination put the song over a number of A-listers such as Taylor Swift's "Sweeter than Fiction" ("One Chance"), Coldplay's "Atlas" ("The Hunger Games: Catching Fire"), Lana Del Rey's "Young and Beautiful" ("The Great Gatsby"), Beyonce's "Rise Up" ("Epic"), Ed Sheeran's "I See Fire" ("The Hobbit: The Desolation of Smaug"), Jay Z's "100$ Bill" ("The Great Gatsby") and Fantasia Barrino's "In The Middle of the Night" ("Lee Daniels' The Butler").

Studio System News includes an interview with Bruce in which he mentions Ken Wales:

Christians might also want to know:
* Native American spirituality expressed briefly and is compared to Christianity
Posted by Rich Swingle at 8/20/2011 12:05:00 PM 4 comments:

We saw Performing Tribute tonight, featuring Ann Van Hine, who's husband is featured in my play, Five Bells for 9/11. I've talked about 9/11 so many times over the past decade, but tonight is the first time in five years that I really grieved. The last time was when I was prepping for my performance at the five year mark. Now that I'll be prepping for performances again (itinerary.richdrama.com) I'm sure to be grieving all over again. But it's healing. I didn't realize that my own healing process isn't complete. Our nation and our city certainly have more healing to do. So I'm glad to live that day again, praying that those who need it will join me. One of the performers tonight said that retelling these stories is honoring to the memory of those that were lost. That's another reason I'm glad to grieve again.

There will be several more free performances of Performing Tribute in the NYC area: PerformingTribute.com.

This is the announcement for my upcoming performance at the church of one of the characters in the play...
Begin forwarded message:

Five Bells for 9/11
"Five Bells for 9/11"  is a memorial to those that died and to those that were wounded physically and emotionally on that infamous morning.The play tells the stories of three people that were directly impacted: Bruce Van Hine, a fire fighter for Squad 41; Lana Ho Shing, a mutual funds specialist for Morgan Stanley, and Father Brian Jordan, a Franciscan priest at the Church of St. Francis.
Writer and actor Rich Swingle created this piece to leave the audience with new, healing memories linked to those that still wound us even 10 years later. Ann Van Hine, Greenwood Lake resident and wife of one of the characters in the play has said, "We shouldn't be coping, we should be hoping." Van Hine will share some reflections following Swingle's presentation.
The one man play will be presented on Friday, September 9th, 2011 7:00PM  at the Warwick Valley Church of the Nazarene on Route 94 North between Warwick and Florida. It is free and open to the public, but tickets are required. Please contact the church office at 986-3013 to arrange to pick up tickets. 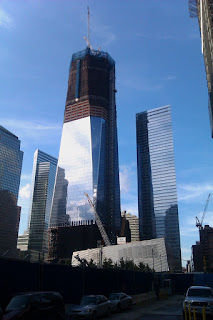 I'm at the base of The Freedom Tower and the 9/11 Memorial to add supplements to the concluding images of my upcoming performances of Five Bells for 9/11.

Closing at the Cross 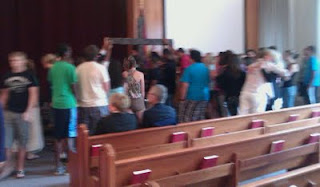 We ended the week at the TAM Conservatory at the cross.

Email ThisBlogThis!Share to TwitterShare to FacebookShare to Pinterest
This enacted prayer is for all that are suffering with illness right now.

The song, "The Lord that Heals", is posted with permission by the songwriter/performer and is available for download here.

This video is available for download free on iTunes, where you can also subscribe to our podcast. Search for "Westchester Chapel" on the iTunes Store.

The makers of Indescribable (http://RichDrama.com/Indescribable) brought Phillip Telfer (http://MediaTalk101.org) to speak to the cast and crew. He brought a powerful message about the importance of choosing wisely the entertainment that we produce and consume.

Anna Street preps us for the street 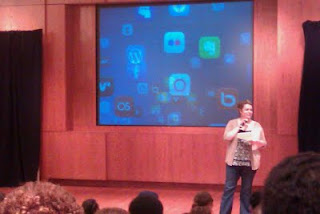 Tomorrow we'll be doing social experiments with strangers on the streets of New York City. It's going to be spectacular!

Prepping for the street 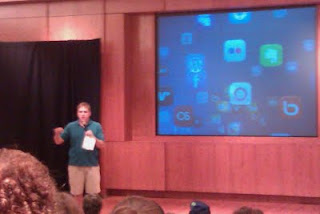 Chuck Goodin is setting the tone for tomorrow's work in New York City by talking about how much of Jesus' ministry was telling stories, and how much of scripture is story, images and visions. 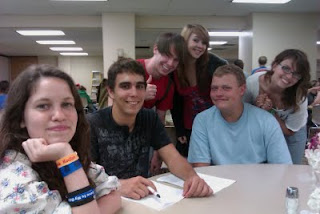 I'm here at the TAM Conservatory (http://theTAMjam.com), and happened to sit at this table of teens that all preached or led adults in devotions before they turned 18. One preached when she was 11.

I told them that one of the key moments that empowered me to pursue a career in theatre was hearing a teenager preach when I was still a teen.

Here's an interview with Kurt Kuykendall, who's story is featured in the upcoming film For the Glory, in which I play Kurt's college soccer coach, Sean Ryan. There's also a scene from the film.