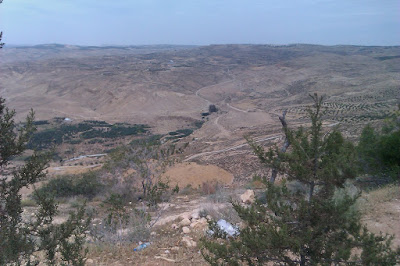 We were doing a bibliodrama atop Mt. Nebo. Our friend Tom was playing Moses, who was looking down Mt. Nebo to the rock that he struck, the act which was keeping him out of the Promised Land, which he could also see from atop Mt. Nebo. I directed him to have a conversation with the Lord about his sin and a final word with his people before they left him there to enter the Promised Land without him.

Out of the corner of my eye I saw an Arab family and particularly the father watching us. I was afraid he was angry because we were performing on the path. I thought they wanted to get past us. After we were done the man, who was Muslim, asked about Tom. He said, "He spoke like a man of God. How can he know God like that?" He allowed us to pray with him, and I prayed that God would show him how to have a closer relationship to God through the study of the life of Isa, the Arabic name for Jesus, who is considered by Muslims to be a prophet. The man was beaming with joy after our prayer.

Email ThisBlogThis!Share to TwitterShare to FacebookShare to Pinterest
Labels: Bibliodrama, CITA to the Nations, Jordan

Oh, such wonderful goodness! Drama's such a wonderful way of removing 'faith' boundaries :)