Processing in the world of media 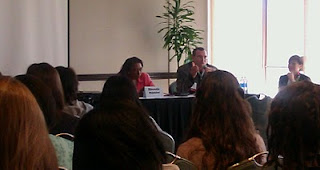 In the media vocational track John Seel told how he found himself as the President of nCore Media, a visual super computing company that produces the fastest processor in the world. The chip can render CGI 15 times faster than their closest competitor.

He said when you step through the doors the Lord opens it will always bring trials that test your faith. He reiterated what Os Guinness said this morning about planning being less effective than following the lead of the Holy Spirit.

They identify themselves as a Christian company, and that has cost them millions of dollars in support. They're wanting to invest in the stories they want told.

He said that as beings created in the image of God we will never flourish if we don't live out the principles of God.

Rhonda Hibbler is the first full-time female production director in the Philadelphia radio market. She keeps a Bible in her studio, and she's found that it changes how people act around her.