The Amazing Month of MasterWorks! We had an amazing month at the MasterWorks Festival! In this photo we're praying for international and Off-Broadway producer, John Forbes, who shared his life-transforming testimony as a part of his master class.


Bev Holloway, casting director for Like Dandelion Dust, Bobby Jones: Stroke of Genius, The Ultimate Gift and about 30 others, took time away from directing Beauty and the Beast in LA to do a casting session with our students, having them read from some of her recent projects. Larry Poland came out to preach one of our sermons and teach a master class. Larry founded Mastermedia International, which ministers to executives in the media. They produce a prayer calendar of the top 365 media leaders and cultural influencers.

Patricia Mauceri (One Life to Live) and Susie Somerville Brown (CATS on Broadway) returned as faculty, bringing even sharper insights to our students from their decades of experience in professional theatre, television and film. Our main play this year was The Miracle Worker, which tells the story of Annie Sullivan's struggle to help the blind and deaf Helen Keller understand that everything has a word. I got to preach a sermon on the fourth Sunday of MasterWorks, and I drew upon the strong images in the play. When I got back home I preached a similar sermon, Finding Our Identity in the Upper Room, which is available on our church's website, WestchesterChapel.org. After both services we offered a foot washing, and in both settings many came forward to wash and receive.

The play itself was quite well-received. There were less than 20 seats available during all four performances, and for our closing show about 20 people sat on the floor or stood. 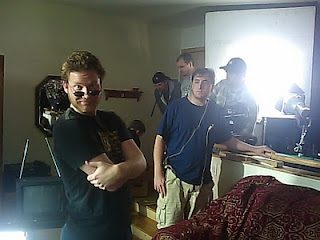 A month before MasterWorks began several from the theatre program were involved in the upcoming film For the Glory. To find out more about their involvement click here. Hannah Cushingham, who was a theatre student last year, drove up for a day to be baptized by my bride, Joyce,  an ordained minister who served the MasterWorks community as lead counselor, and myself. Hannah led the way, and by the end of the month we had baptized seven, most at or in Winona Lake, the site of our festival. Many of their parents read scripture and prayed over them. Joyce baptized them officially, and then I got to dunk them. Now Hannah is doing an internship at the International House of Prayer.

To see last year's report and the many comments accompanying it click here.

To see what students have said about the program over the years click here.

For more photos visit the album MWF 2010 at Facebook.com/RichDrama