What a way to go away 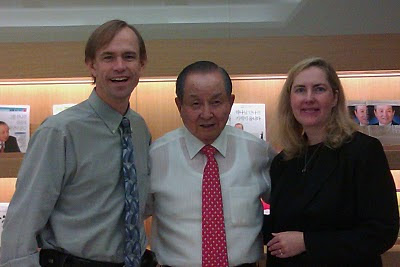 Our last morning in Korea was spent at a monthly Bible study for the Steering Committee for Far East Broadcasting Company, the radio station that interviewed me last week. Billy Kim (photo above), who oversees the FEBC, was the translator for Billy Graham during his 1973 crusade. Since then, Billy Kim has become a prominent evangelist and humanitarian in Korea.

After the Bible study I performed excerpts from Big Fish/Little Worm at their chapel. I was followed by a congressman. He shared that at the time Korea was divided there was only one Christian in congress. Now about 30% are Christian.

FEBC has started a new radio station in an area that has kept them out for 25 years. Whenever they put in a new station Christianity grows, so they're quite excited about this breakthrough.