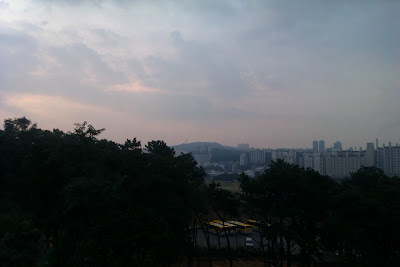 A rooster crowed just as I snapped this shot of Suwon, Korea, at sunrise. We're off to perform Big Fish Little Worm and Beyond the Chariots for the US Army 8th Command, stationed in Seoul.

Earlier on this trip we performed Beyond the Chariots with Korean translations at Wonchon Baptist Church, here in Suwon. Photo courtesy of Jeong-Rae Lee, who worked with Ellen Stewart and La MaMa in New York and to bring their production of Trojan Women to a festival in Seoul.

These performances along with performances and workshops at local high schools and a university were set up by Rev. Joseph Kim, who is the headmaster of Central Christian Academy, and the father of Aaron Kim, who was a theatre student of mine.

For stories from our Korean travels, including our trip to the DMZ, visit RichDrama.com/Korea, and for more photos visit Facebook.com/RichDrama and the photo albums Asia 2010 Part 3 and Asia 2010 Part 4.