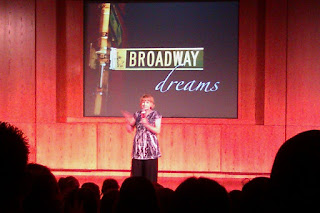 I've seen it three times, but I was still laughing and weeping just as much.

In the midst of songs she's sung over the years she told the story of how she was cast in CATS on Broadway, and how, after almost a decade in the longest-running Broadway musical, she was hired by the Salvation Army to encourage the arts throughout the Northeast, including their annual conservatory where I've been teaching and directing this week: http://theTAMjam.com.