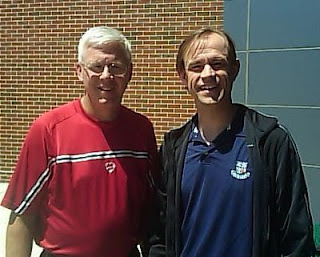 To me, Al Ross has only been a character in the screenplay until today. As the screenplay indicates, he was the one who convinced Kurt Kuykendall to try out for the college soccer team. I've been picking Al's brain for stories about his coach, so that I can play Coach Ryan more effectively in the film (www.RichDrama.com/ForTheGlory).

The more I hear of the story the more impressed I am with the work Katherine and Chris Craddock have done with the screenplay to heighten the drama.

My first scene was put on hold, but I'm up next.

It went well! One of the gals on set is from England and is familiar with the Scouse accent, which is what I'm using, and she was willing to sit with me and fine tune my lines.

Here's Al with Robby Stone who's playing him in the film...