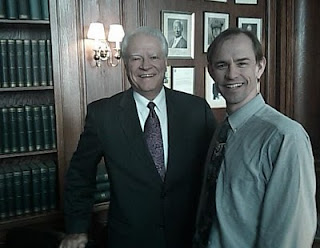 Larry Poland, who founded MasterMedia in Hollywood 25 years ago, visited MasterMedia NYC recently, and he said he's looking forward to being a master class instructor this year at MasterWorks.

He founded the organization when he was working on his doctoral dissertation. He would walk into the offices of CEOs, presidents and vice-presidents of major media conglomerates and ask them about their faith. He's still doing it today: this morning he met with a billionaire.

He shared how his mother was having such a difficult pregnancy with him that she told the Lord to end it unless He had something special for her child to do. At that moment Larry moved in her womb for the first perceptible time.

But, with all the influence Larry has had on today's media, he shared that his response to the question, "How would you sum up your ministry?" was, "He must increase; I must decrease." Then he expounded John 3, where John the Baptist made that his response to the people who were wondering what he thought of all his disciples following "that man on the other side of the Jordan": Jesus.

Larry said that when he was growing up in Winona Lake, IN, now home to The MasterWorks Festival, his father told him that he had so many gifts they could get in the way of what God wanted him to do. His father advocated that he focus on developing availability and dependability. He's always sought to be available to God, no matter what he's called to do or not do, and he's always sought to be dependable in the things to which he was called.

I told him that would be a pretty good message for the MasterWorks community, when he preaches Sunday morning, July 4. He smiled and said, "I'll be available to whatever the Lord wants me to share." I'm sure he'll be dependable to do so.