What are the chances? 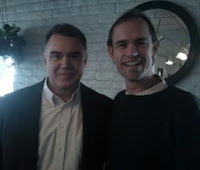 We were having lunch in the pizza parlor where I ate many lunches as a student of Phoenix High School, Phoenix, Oregon, a town which had a population of 2,000 when I was a kid. Who should be having lunch there but Jon Davis, the lead elder at the Beijing International Christian Fellowship, who arranged for me to perform an excerpt from Beyond the Chariots there during the Olympics!

Joyce and I went to bed at about 10pm, and just before midnight Joyce asked if I was okay. She thought I was sobbing, but I was laughing my head off thinking about the chances we would have connected with Jon where we did. She woke up thinking of the same thing, just before my uncontainable giggles.

Now us theatre folk aren't known for our mathematical prowess, but if someone were going to calculate the probability of our encounter with Jon they'd have to consider the following:

*the vast distances between Beijing, Phoenix, Oregon, and New York City
*the relative size and populations of Beijing and New York City
*the fact that, even after doubling in size since my graduation, the population of Phoenix could fit in an average apartment complex in Beijing or New York City
*the distance between Phoenix and the closest city with at least a million people (about 280 miles)
*all the decisions that factored into placing Phoenix, Oregon, on Jon's itinerary at that point in time
*the fact that last May George Fox University chose me, a Nazarene, as one of the featured presenters for their Quaker Heritage Week, which was what brought me out from New York City
*the fact that this was one of a handful of trips to Southern Oregon on which I didn't set up a performance on a Sunday (Since I've never performed in Phoenix since graduating from high school the probability of me eating lunch there before or after a performance would have been minuscule, and I can only remember eating at the pizzeria a handful of times since graduation.)
*the probability that each in our party of eight would contribute to our conversation in such a way that our 8am breakfast would extend until after 11:30
*the fact that Joyce and I didn't hesitate to stay with family past the starting times of every local church we knew about because on Friday afternoon we "happened" to walk into my grandmother's residence at the exact moment they were starting their only weekly church service, which we enjoyed immensely
*the fact that my dad's cousin mentioned the Phoenix Historical Museum and could let us in for a tour
*the duration of each person's time at any given display
*the fact that my dad's cousin recommended Angelo's Pizzeria
*the fact that my dad's cousin recognized the pastor and his wife who were hosting Jon and his wife and mentioned he was hosting people from China (Though we shared two hour-plus services in Beijing Jon and I only spoke for about a minute that day. For the rest of the services I was either watching him interview Olympic champion Madeline Manning Mims from backstage or he was watching my backside as I performed.)


If any of these things hadn't been in place we either wouldn't have been in the pizza parlor at the same time or, if we were, wouldn't have recognized each other.

It's been a long time since I've studied probabilities, but the way I understand it, the probability determined by each factor is multiplied by the next to determine the final probability.

Then multiply that by the possibility of also having sat one row behind a gal who graduated from Phoenix High School three years after me in the Bird's Nest Stadium just over a year earlier during the Olympics: Out of 90,000 Seats. I'd been invited to perform for athletes in the Olympic Village that day, but the night before a dignitary flew to Beijing unexpectedly and needed the pass I was going to be given.