a door closed, a Way opened When I was here in Hong Kong in 2002 we noticed large groups of Filipinos sitting on the ground in public squares. We found out that they are live-in help, so they have no place else to go on a Sunday, their one day off. Our hearts were moved to reach them somehow.
Yesterday I found out that my speaking engagements in the two morning services were cancelled. We were disappointed, but over breakfast with the director of the Hong Kong YMCAs, he told us...we should perform for the Filipinos on the public squares!
So we went to the Filipino fellowship and told them what the director had said and asked if they had any ideas. Turns out the teacher of the fellowship had been Hoping for a surprise. So I performed "The People J Knew". There was a woman there for the first time, and she decided she wanted to Know J! Yay! Then we had lunch with the fellowship. 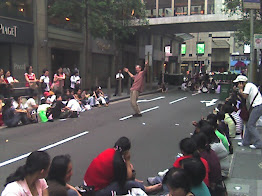 Fortified with Filipino fare, we went to the streets, where I performed "The People J Knew" in four different locations.

We had such a wonderful time!

Filipino friends, on 24 August I'll be back to perform my play (www.RichDrama.com/BeyondTheChariots) and then teach you some dramas we can do on the streets! See you then!
Filled with Hope,
Rich and Joyce 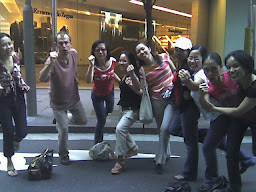 We did return and teach them dramas they performed in Tagalog on the streets in the same four neighborhoods! This event inspired them to go to the streets once a month and give gifts to those who have birthdays and invite them to church. One of the women even had the sketch we created in Tagalog performed at her wedding!
I was telling this story at the Asia-Pacific Nazarene Theological Seminary in the Philippines, and one of the students said that she was on the streets of Hong Kong in 2002, when I was praying for the Filipinos. She said she was struggling with what to do with God, and there she sat in seminary, six years later!

You can see more photos from that first trip to Hong Kong by clicking here and here for the second and third (after the Philippines) trips.
Posted by Rich Swingle at 8/10/2008 10:38:00 AM