We had a wonderful lunch with my relatives and then drove .4 mile to interview Mary Previte. She's the great grand daughter of Hudson Taylor, and was in the internment camp with Eric Liddell. I was so moved by her stories!
Then we went to the University of Pennsylvania and filmed the plaque that declares the school motto: "In the dust of defeat as well as in the laurels of victory there is glory to be found." Liddell ran at the Penn Relays there and quoted that motto when he spoke. We also met a fellow named Dan who was kind enough to run against me as Eric Liddell.
Posted by Rich Swingle at 4/30/2008 09:07:00 PM No comments:

Here's a recent interview with Ben Stein about his film, which opened this weekend, about how scientists and teachers who believe in Intelligent Design are being censored: Ben Stein is Expelled! Joyce and I just watched August Rush. We were both quite moved, and I was a complete mess. It's got some profound stuff in there about how God creates great beauty out of bad choices and orchestrates (pun intended) divine appointments.

We're also going to try to catch Expelled: No Intelligence Allowed, in which Ben Stein

...realizes that he has been “Expelled,” and that educators and scientists are being ridiculed, denied tenure and even fired – for the “crime” of merely believing that there might be evidence of “design” in nature, and that perhaps life is not just the result of accidental, random chance.

For a trailer and theatre locator visit ExpelledtheMovie.com. Encourage Hollywood to make more of this kind of film by seeing it opening weekend.
Posted by Rich Swingle at 4/17/2008 12:20:00 PM No comments:

John Newton was a slave trader before he became a Christian and wrote Amazing Grace. Ken Wales' film Amazing Grace tells part of Newton's story. I watched it again the other night and was moved deeply all over again. This clip shows how the tune that Newton used for Amazing Grace most likely came from a Negro spiritual. It's eight minutes long, but you can get the essence of this profound connection in the first half. The rest is a beautiful rendition of the song.

Email ThisBlogThis!Share to TwitterShare to FacebookShare to Pinterest
When I was in Guatemala with Compassion we visited a Compassion site that provided pure drinking water for local residents. This clip shows another group that's working to provide drinking water around the world. Jennifer Connelly's character shows the profound reality of how blessed we are in developed nations.

Email ThisBlogThis!Share to TwitterShare to FacebookShare to Pinterest
Labels: Guatemala

One of my students at MasterWorks told me before joining us that he wanted to focus on being a theologian rather than an actor. I told him the program would enhance his abilities to express theology. I'm glad to see Sadler Mahan is proving that out with the help of another MasterWorks alum, his brother, Cody. 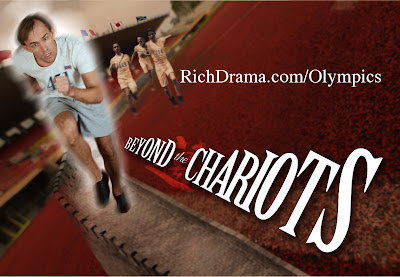