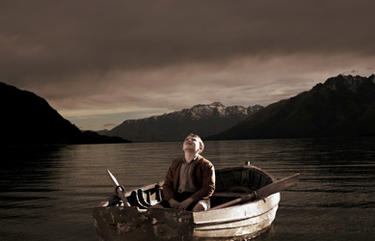 Joyce and I just enjoyed The Water Horse. The film was highly touted during the Edinburgh Fringe Festival in August. It didn't disappoint as a breathtaking look at Scotland's Highlands, but it was much more than just the beautiful scenery, as one of the characters notes. It's about a young boy learning what's real, and what sort of man he is to become.

I remember a moment in time when I made a very clear decision that I would carry some of what it was to be a child into adulthood. I was sitting in a restaurant with several friends from high school. I had to leave to get back to class and I was tucked into the middle of a circular booth. My first inclination was to crawl under the table. I instantly checked myself, as I was too old for that sort of thing. Then came the moment of clarity: I knew I would grow up and be a responsible member of society, but if I lost all of what was childlike, something in me would die. I saved my own holistic life and dove under the table. It's a decision that's brought me a greater ability to write and act, and most certainly it's allowed me to have a deeper faith.

The Water Horse shows a boy at just such a juncture, but it's much more interesting than a table at Angelo's Pizza.