We're relaxing in Washington, DC, where my nephew made this swell bird.

Inside was a chocolate egg. Inside the egg was a plastic yoke. Inside the yoke was a dragon. Who knew a turkey could give birth to such a thing?

Back at Carnegie Hall I was back at Carnegie Hall for the third time in as many months. This time it was to hear another MasterWorks (MasterWorksFestival.org) intructor, Dag Eriksen with the Bergen Symphony. They came over from Norway for a US tour.

The NY Times review didn't mention that the audience called the conductor back nine times after the final piece on the program. That included two encores. It was thrilling.
Posted by Rich Swingle at 11/19/2007 06:57:00 AM No comments:

Ken Wales joined us at MasterWorks last summer (click here for the post). Ken recently was used as the centerpiece on an article on a very encouraging article, Faith on Film in Charisma. Starting today the DVD of his film Amazing Grace is available on DVD.
Posted by Rich Swingle at 11/13/2007 09:13:00 PM No comments:

Waiting for my Fingers 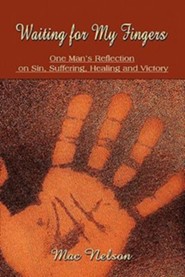 Mac Nelson, who was best man at our wedding, just published a book, Waiting for My Fingers:

One Man's Reflection on Sin, Suffering, Healing and Victory. Joyce and I are both mentioned in this amazing story, and some of you were even praying for him through one of my blogs (SwinglePrayer) before, during and after his surgery. What began in the hospital was brought to completion in a very dramatic fashion.

Last summer at MasterWorks John Kirby spoke about how he coached Jim Caviezel and many other actors on the Word of Promise project. He played an excerpt, which was so compelling. It's now available...

I just rediscovered an article on the Welch Revival. It broke out on October 31, 1904. Christianit Today reported that "crime levels plummeted and courts were closed because there were no cases to hear; families were reunited and marriages were restored; epidemic levels of drunkenness and violence in towns were dramatically reduced; prayer meetings broke out on street corners, in mines, in police stations and on rugby pitches; and more than 100,000 people became Christians within a year."

Lord, bring more of that!