To download The Effect of Sociodrama on a Population of Men in Transitional Housing, my masters thesis from 1997. Make a suggested donation of $7:

My mentor, Pat Sternberg's book on sociodrama: Sociodrama: Who's In Your Shoes?

Here's a follow-up based on the same material of one of the classes she taught at Hunter College: Theatre for Conflict Resolution

Called to the Arts

Then Dr. Marcos Rivera, Sr. Pastor of the Primitive Christian Church, laid down a theological foundation for the calling to the arts.

Be the best you can be in the field to which you're called. "The fruit of your life should be excellence."

Live lives of integrity. "Your values should effect the projects you do, not the other way around." 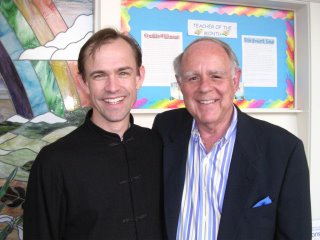 Wilberforce's accomplishment has meant even more to me since a discovery I made while performing at Pocklington School near York, England. I performed A Clear Leading, about John Woolman, who spoke out against slavery in America 100 years before the Civil War. He spoke against slavery throughout England and died in York the same year that Wilberforce wrote his first anti-slavery essay as a student of Pocklington School. The headmaster thinks there's a high likelyhood that Wilberforce heard Woolman speak.
Posted by Rich Swingle at 6/14/2006 10:18:00 AM 1 comment:

Ken Wales, the executive producer on CBS's series Christy and the film Amazing Grace, came out to see my performance of Beyond the Chariots in Los Angeles. He wants to produce a film about the same part of Eric Liddell's life covered in my play, and he invited me to write the screenplay. The working title is Wings as Eagles. Please join me in praying for this project. I just performed Jonah at Alex Walker's church in Upland, CA. Alex, pictured here with his wife, Jacquie, and their son, Sam, was in my Jr. High cabin when I was a counselor at Twin Rocks Friends Camp while I was in college. Tonight I'll perform Beyond the Chariots: RichDrama.com/Itinerary.
Besides serving as music and young adults minister Alex is lead singer and song writer for the band Five O'Clock People, who produced a CD through Pamplin Records: The Nothing Venture. They've completely transformed the theatre across from the Helen Hayes Theatre, where I keep my office, for Spider Man 3. Tomorrow at 5am it will be back to normal and ready for the History Boys, the play that's normally there.